Posted on November 18, 2013 by lensandpensbysally 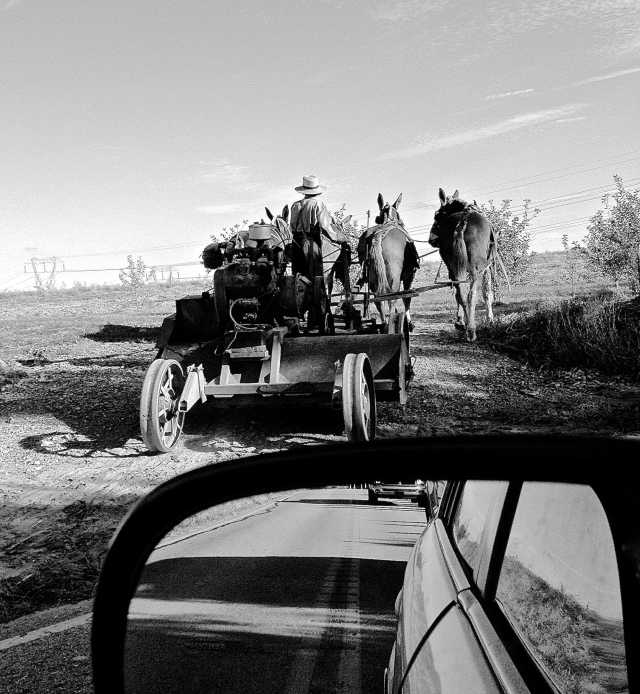 Let me know which you prefer: black and white (conversion) or full color (the original is in the Tip of the Week section).

I wander aimlessly, roaming country roads and city streets. Sometimes a destination becomes lost in a discovery of another place. My tendency to gallivant in search of visual panoramas or scenes of spectacular quietude or outrageous engagement is all the encouragement needed. But I also receive energy from the process of the search, the endless road ahead.

There are moments when time can be stopped to wed opposite worlds. In that second the mind understands the significance of what is before it, the brain makes calculated action that stills the scene. This happened to me a few weeks ago.

I was traveling home from a photo shoot in Pennsylvania, and suddenly a wagon appeared that was pulled by four stocky horses and driven by an Amish farmer. My car was clipping along at twenty-five miles an hour on a curvy country road. That instantaneous sight pushed my synapses into high gear; I slowed the car to a crawl.

The wagon moved at an even slower pace. This scene was a photo opportunity not to be lost. My iPhone was resting nearby, my DSLR packed away in the trunk. Time was escaping as the farmer steered the wagon to the left and onto a dirt road.

I had the wherewithal (and just enough time) to grab the phone. Now I was traveling at a snail’s pace. Intuitively, I knew that I wanted the juxtaposition of the wagon to my vehicle. With unbelievable good fortune I was able to capture the duo: the wagon and my car seemingly touching each other.

My photograph in the Lens section melds the past with the present: an Amish farmer using human and animal muscle to forge a living as well as the notion that this team was doing their daily chores. I was seeing a farming life positioned against a line of automobiles and moving between two worlds.

I felt a sense of wonder that the Amish live without any modern conveniences, and are able to continue their “plain” life. Their days are packed with ritual and tradition, and it is accomplished with human might. Ours are forged very much by twenty-first-century technological ingenuity.

Each allows for survival and subsistence. Neither are black and white: no judgment here.

Tip of the Day: It’s a decision made by each photographer, mostly during the editing process: whether to render an image in its original palette or convert to monochrome.

Here is the original photograph used in today’s challenge.

For me the conversion to black and white allowed the story to focus on the symbolism that is pressed into time: the power of the work horses against the power of the car; the tortoise and the hare syndrome (slow wagon vs. fast car); the relationship of humans to their vehicles; the reflection of the land from the car window and side mirror; the shadow of the wheel of the wagon against the shadow of the car. As important, the monochromatic faceless farmer was in keeping with the Amish belief that a photograph where an individual can be recognized violates the Biblical commandment, “Thou shall not make unto thyself a graven image.” To me the color shot adds another layer to the storytelling: the hues distract me. But the black and white forces the pivotal elements to move into the forefront. As always it’s the eye of the viewer who renders the image worthy. Still what engages a viewer is influenced by full color or a range of blacks and whites. So I study the character of each image to determine how to present its best side. These experiments in personal observation help me to examine my visual arena. They also force me to move over the edge into the seen and unseen. Then my choice of an editing palette becomes irresistibly clear.

Here are other entries for today’s challenge:

As always I welcome any comment about this post or any part of my blog. Here’s a reminder of the monthly schedule with themes for upcoming Phoneography Challenges: