Phoneography and Non-SLR Digital Devices Photo Challenge: Black and White (Following the Sun to the West and Then to the East)

Posted on May 19, 2014 by lensandpensbysally 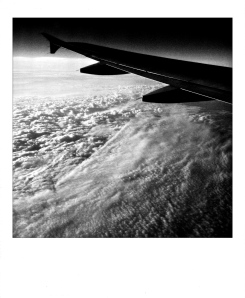 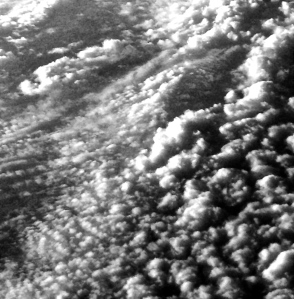 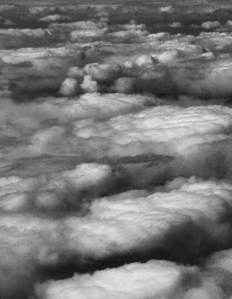 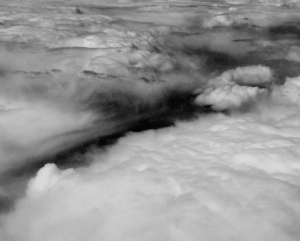 When I travel by air, I do relish the opportunity to view the world from above. The topography always astounds and shakes my thoughts. I have difficulty absorbing the grandeur, the profound beauty, the omniscience of our earth and sky. These experiences linger, and are tucked into a treasure trove of the unusual and usual.

On my recent trip to the West Coast we had a pre-dawn flight. It was a chance to see the sunrise, and cast my gaze upon the light’s play with early morning clouds. On my return flight to the East the late night gradually took hold. Rain clouds prevailed, and twilight was filled with a skyline that kept me attentive.

There are, to say the least, many disadvantages to photograph through airplane windows. But I do make the effort to record the seen (scene) before me. Conditions could be so much better than a double-pane window, fast-moving and airborne vehicle, and focal ability and lens of the non-SLR type aka iPhone 4s. The chances of clarity are daunting, but I am driven to try.

On each flight (two to the West Coast and two to the East Coast) incredible cloudscapes swept from my vantage point all the way to the horizon and above. Even if I just captured a few images, I would have been satisfied.

I admit to an obsession with cloud formations. Just the science of them intrigues, and our dependence upon them is staggeringly vital. Beyond those obvious points, they mesmerize. They always reinvent themselves, they always perform, they always come in  sizes from tiny or grandiose or in-between. They’re simply glorious.

Mostly, a gaze in the here-and-now displays one part of their proportions. As time ticks they are redesigned, making constancy impossible. Subtle but nonetheless changes do appear. Or action-packed moments occur. Consistent alteration rivets and sparks the sky’s stage, and I fixate on them as a subject to record and watch.

Their aesthetics and drama draw me. Their fractions and arbitrary sizes keep me posed to wonder what is next.

They can calm or incite action. They can be quiet or induce boisterous sounds. They can be graceful or clumsy. They can devastate or triumph. They can be illusive or blanket the entire skyline.

So as I looked across the vast expanse of cloudscapes, I was not at all interested in their scientific names: It’s their power to seduce me that revealed my devotion. It’s enough that they embellish my life, giving it a purity even in their forceful possibilities.

In the Lens section are five examples of cloud formations that unveiled themselves during those coast-to-coast trips. They seemed well-suited to a black-and-white format, which helps to accentuate their charm and energy. Mostly, from east to west and west to east each cloudscape became its own fluid narrative.

Tip of the Week: Recently, I discovered the work of English photographer Michael Kenna. His black-and-white photographs melt my sensibilities. They push the idea of what we see and what the “seen” actually is. Here is a quote from an interview by Pro Cameraman during summer 2012: “My themes don’t change very much, the countries where I photograph do. I am interested in the relationship, juxtaposition, and interaction between the landscape and the structures that we, humans leave on the landscape. Stories, footprints, evidence, traces, atmosphere, and history… That’s what I always return to. Even if I am photographing in what could be considered wilderness, there is usually some kind of hint and touch that this landscape has been changed or altered by our intervention. In the other extreme, I could be photographing nuclear power stations in the middle of the night. There may not seem to be a great deal of nature there, but it is still the relationship somewhere between the two that draws me.” Click here to read the full interview.

74 Responses to Phoneography and Non-SLR Digital Devices Photo Challenge: Black and White (Following the Sun to the West and Then to the East)