Posted on July 7, 2014 by lensandpensbysally 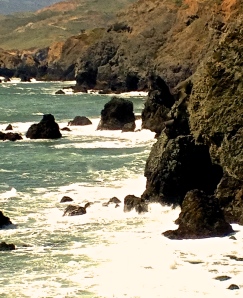 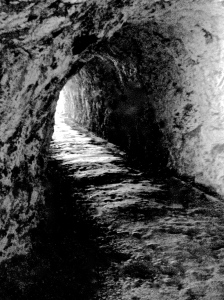 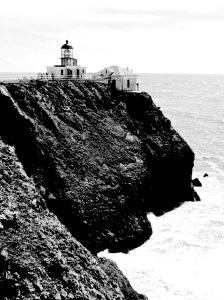 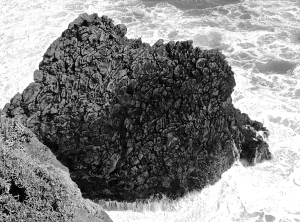 Pens: Mother Nature has been my muse for longer than I have given her deeply-committed thought. As years add to my experiences, a rising level of emotion accompanies never-seen-by-me natural wonders as well as local wildlife. Nature is never taken for granted.

These encounters can be as small as a baby praying mantis or as mammoth as California’s Marin Headlands. Size really doesn’t matter.

A place, which exhibits grandeur, quickly catches people’s attention: Grand Canyon, Yosemite National Park, Yellowstone National Park, Mt. Everest, Great Barrier Reef… And so it was that my dear friend and I spent half a day exploring the expansive Marin Headlands at the Golden Gate National Recreation Area in Northern California.

As though Mother nature was challenging our commitment, we arrived on a gray, overcast late morning. Surprisingly, the subtle colors seemed bolder than they should have been. The nearly monochrome panorama made the spectacle even more pronounced, demonstrating how visual acuity plays with our mind’s interpretations. Then the sun appeared.

Two years ago I stood at another vantage point on the Headlands to gaze at the Golden Gate Bridge and San Francisco Bay, which was spectacular. This new location at Point Bonita is broader, wider and more inclusive, because it is situated at the tip of the jutting cliffs. It’s bordered by massive rock formations, large swaths of green space and vistas of the bay. Various views from the Point kept us occupied for hours.

The Golden Gate National Recreation Area, which is the largest U.S. urban park, maintains the Point Bonita Lighthouse. We walked the half-mile trail and through a tunnel to reach the foot bridge that guards the lighthouse. That description may seem strange, but that’s how it felt. 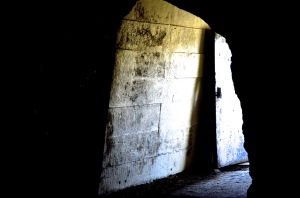 This familiar yet unassuming structure has been guiding ships for over 150 years. We were not surprised to share the trail with ample visitors. Even with rolling clouds the scenery was so enthralling that we lingered and lingered. We had been there so long that we neglected our picnic lunch.

As satiated as I was on the walk back, the next sighting raised my emotional responses enormously. Below in the bay 120 harbor seals were sleeping on sandy banks and sunning on water-drenched rocks, which encouraged my cup to overflow its rim. 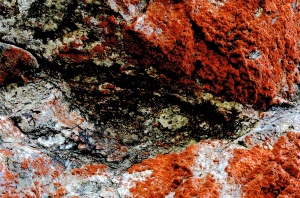 From this spot the Golden Gate Bridge was entirely visible. Its signature orange seemed content with the day’s slightly turquoise cast on the bay.

The panorama is so classic that I felt we were posing for a postcard to be sent to family and friends. I could sense the excitement that forced San Francisco’s population to rise from 900 to 20,000 (National Park Service brochure) during the Gold Rush. Most of the 49ers came through the Golden Gate.

When you are devoted to Mother Nature as I am, it’s relatively easy to have your heartstrings pluck melodic music during such excursions. Instantly, I became completely immersed in the visual, the history, the moment, the place. Everywhere the wild seemed to be appreciated.

The day was pure harmony and secured multiple vistas in my treasure trove of memories.  To be sure nature’s natural history continues to write a remarkably stellar story.

Tip of the Week: I’m always on the alert for articles about the environment. On Earth Day (22 April) of this year The New York Times announced the PBS viewing of the documentary, “American Masters: A Fierce Green Fire.” The film covers five topics: conservation, pollution, alternatives, going global, and climate change. It’s based on the 1993 book published by The Times’ environmental reporter Philip Shabecoff. This film covers 50 years of the environmental movement and social justice. Robert Redford and Meryl Streep are included as advocates for the movement. To view a trailer (time-2:30) about the documentary, click here.

“A sweeping history of the environmental movement, ‘A Fierce Green Fire’ is both a cautionary tale and a triumphant one.” —The Washington Post, 2014

From a 2014 review in Publisher’s Weekly: “Shabecoff concludes that an ecologically sound society can also be economically sound.”

View other entries for today’s challenge: 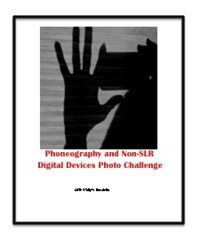 If you’d like to join the Photo Challenge, please click here for details. If you have any questions, please contact me. Below is a reminder of the monthly schedule with themes for upcoming Photo Challenges: