Posted on April 7, 2014 by lensandpensbysally 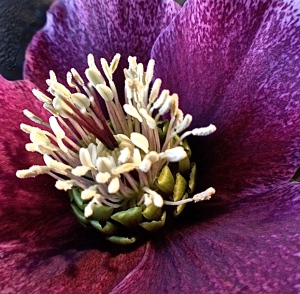 A large portion of my photographic palette is my muse, Mother Nature. I begin my day with a cup of tea in hand and an eye to my birding station. No matter the season spontaneous activities arise from the menagerie of lively creatures that spend much of the day there.

Yesterday I spied a pair of spritely red-bellied woodpeckers. While the male is a usual suspect, the female (to my knowledge) has never appeared. By nature they are solitary. Still, it’s spring and that brings the expected and unexpected. This sighting was enough to bring ebullience to the entire day’s overcast and shadowy clouds.

Not a day disappears that I do not ponder the state of Mother Earth. My anxiety about climate and environmental issues follows me, causing an edginess that will not surrender. Recent reports by the Intergovernmental Panel on Climate Change and the American Association for the Advancement of Science makes this unease even more pronounced. To put these Reports in perspective, you can read two articles from The New York Times‘ “Opinion Pages” here and here, which appeared last week.

To buoy my spirits I’ll walk through parkland or wildlife preserves. But I do not have to stray from my personal sanctuary to soothe my concerns. One step into nature heals me at least temporarily.

Yesterday on a walk through my cultivated and wild habitats, I stopped to admire those dependable signs of late winter and early spring: daffodils. My circular grouping and naturalized areas are still in their early stages. These dignified buds are a worthy symbol to usher in spring. When the yellow glow bursts forth, it’s as though winter’s story dissolves, and spring’s glory finally has staked its claim.

In truth daffodils are not at the top of my list. The earlier crocus and hellebores, which awaken my woodland areas with colorful splendor, lure me over and over to gaze at their mastery.

I’m also enamored with the quiet beauty of a bud. Budding trees and spring flowers seem to be spreading with an overwhelming vengeance against the finale of winter.

Typically, at springtime we ponder renewal and re-definition. I also reflect upon nature as one of the epicenters of the planet’s health.

And as each blossom or leaf of this or that surfaces, we realize that no two are ever the same. Individuality is rampant in the natural world. That characteristic is also embedded in the human condition. But there is a place where we come together in  the collective unconscious—a place where the entire world must find consensus to work for the well-being of Mother Earth.

In the Lens section is another one of my salutes to spring’s re-appearance. This week’s photo shoot was one frustration after another. Each session did not produce what I wanted: a gem to represent the rekindle of spring.

I focused on blades and shoots of early spring flowers and herbs. But none gave me those architectural lines that I sought. I cut some daffodils, but the results had me turn elsewhere.

I do not EXPECT from a photo session; I act and do. I let it flow, stay with the moment. To ply some of the morning light was a goal, but the days remained grey and darkened with phases of rain. Images became illusive.

Finally, I found a lone crocus and snipped a few blossoming hellebores. I slipped them into a glass vase, and found an angle that gave the crocus a sculptural freeform. Next to the crocus is a hellebores waiting and watching.

One of the hellebores was slightly darker and exuding more vibrancy. They remain steadfastly one of my most treasured woodland early bloomers.

After peeling away the week’s disappointment, I am able to show two cheery species that forecast spring’s rejuvenation of the landscape. They provide a lesson in the resiliency of Mother Nature–a resiliency that is real yet fragile nonetheless.

Each of us can cultivate a small portion of our world, and return more and more of our cities and towns to natural habitats. I continue to be nonplussed that people have become more and more removed from Mother Nature, who is a source of considerable comfort and spiritual awakening for me. During the renewal of the  landscape I am especially hopeful–hopeful for the continuation of a four-season landscape that is appreciated by all.

Tip of the Week:

“Art Wolfe’s photographs are a superb evocation of some of the most breathtaking spectacles in the world.” ~~ Sir David Attenborough

Nature photographers are known to be conservationists and environmentalists who work tirelessly to protect vanishing wildlife. American landscape photographer Art Wolfe (b. 1951) is the epitome of this kind of advocacy. For over three decades he has been interpreting and recording landscapes across the world. Wolfe combines art and journalism to educate and motivate others to get involved with issues that matter most to him. Here is a quote by Wolfe that summarizes his photographic philosophy: “When we confront a landscape, we are surrounded by a chaos of visual elements. The scene challenges us to extract a unique composition that encapsulates the character and emotional impact we sense at that moment. We need to get past the overt subject, the postcard view, to pick out the unobvious yet significant aspects.” To read more about Wolfe, click here.

View other entries for this week’s Photo Challenge: